Ahhh, yes, where to start…..In 1993, shortly after the collapse of the Soviet Union, the US entered into an agreement with Russia titled “1993 HEU Purchase Agreement” The agreement was for the US government to buy as much of Russia’s nuclear fuel used in nuclear weapons as they were disassembled in accordance with the 1991 treaty, START 1

This material was then sold to the US government through a newly formed agency called United States Enrichment Corporation (USEC) This material provided funding for a then, shaky nuclear industry in Russia after the collapse. At the same time it supplied 50% of all the fuel America’s existing nuclear plants required. This arrangement of government to government ended in 2013. But by that time Russia was selling the US this same material, but commercially on the open market. That began in 2011 Russia now sells directly to our utility companies. I suppose, knowing Russia as I do, that probably was a mistake. Bring in the corruption!

Shortly after Hillary Clinton became SOS, the FBI opened an investigation into what they thought might be illegal activity within the American nuclear fuel industry. They began to accumulate evidence that kickbacks, bribes and money laundering were taking place.  A Russian national working for Rosatom, named Vadim Mikerin was transporting enriched uranium directly to utility companies, from Russia, using no bid contracts with TENEX, the subsidiary of Rosatom that was selling the uranium.

These contracts were above market rates and kickbacks ensued, being paid to offshore shell companies for consulting or other phony services never performed. We now know….in 2017…..that the FBI had an informant within the criminal element that was recording and watching the criminality. All through the 2009-2010 period, when Rosatom was taking a majority interest in Uranium, the FBI never revealed any part of the investigation to congress or any agency of the government, even though they had overwhelming evidence. They kept this investigation secret for 4 more years until 2014, when Mikerin and his associates were arrested. You can read the indictment here. Keep in mind, CFIUS, who I’ll speak about next, had a chance to stop this sale of American uranium. The FBI knew that crimes were being committed. They allowed these crimes to continue for over 5 years. Not until Russia invaded Crimea did they take action. By then HRC was no long SOS. Coincidence? 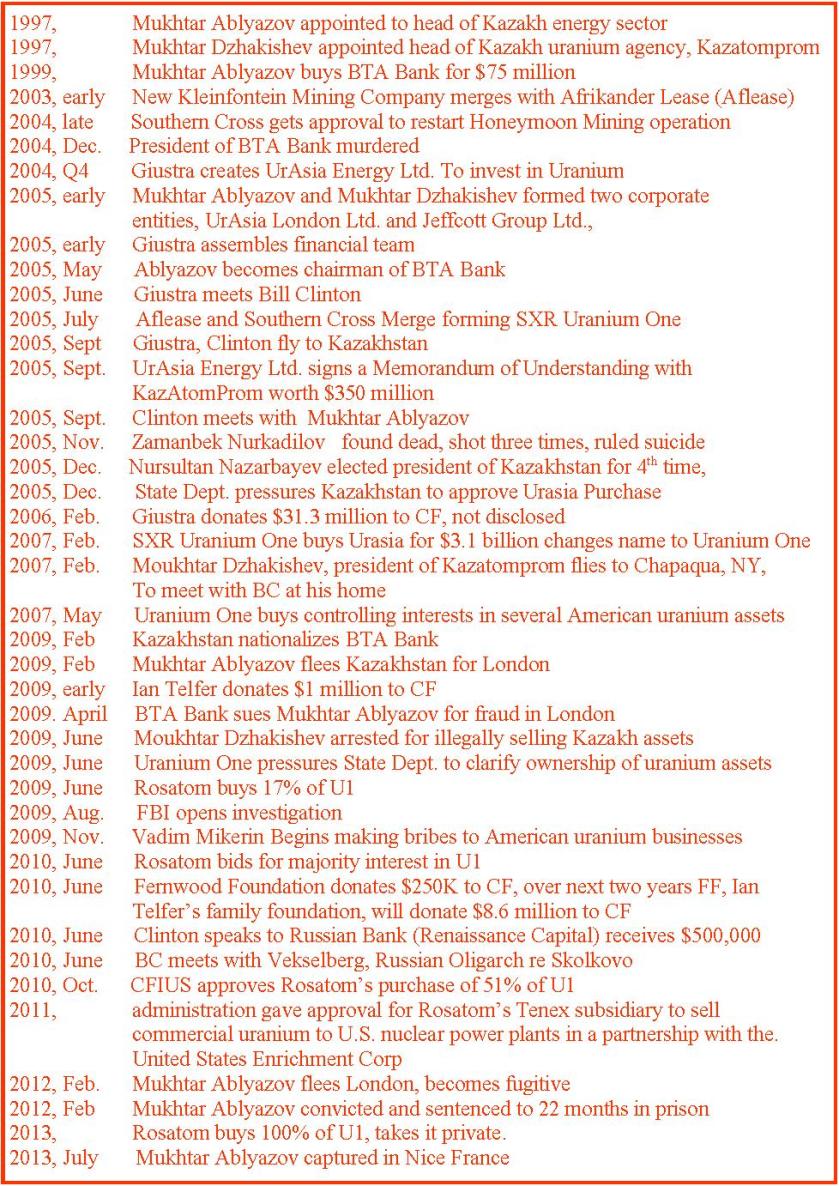 In the spring of 2007, Uranium One makes a play for Rio Tinto, one of the largest metal mining multinationals in the world. Rio Tinto has operations in the US and does mine for uranium. The two behemoths come to an understanding.

But prices on ore begin to rise dramatically and Tinto pulls out of the deal. Not to be detoured, Uranium One sets its sights on Energy Metals, a relatively new company who has spent the last three years acquiring American properties rich in uranium reserves. They come to an agreement and Uranium One now owns 20% of American uranium reserves. Since Uranium One is a Canadian company, no fuss was made and no investigation took place.

This brings us to June of 2009. I realize I bounce around a little, but this is not a linear presentation, as much as I would like it to be. There are many things happening at the same time.  In June of 2009, Russia buys 17% of Uranium One stock. Now, I hate to have to explain this, but Uranium One is a Canadian company, not an American one. Private stock purchases are not normally scrutinized by law enforcement or government. But also remember, there is an active investigation by the FBI going on in June of 2009, and this is Russia.

Now I have to explain CFIUS. CFIUS stands for Committee on Foreign Investment in the United States. This is not an agency or department, but a committee. The committee is made up of 16 people working at various agencies and departments. Some are absolutely top level people. These are the positions represented on CFIUS:

The representatives of these agencies each get a vote on whether or not the sale or transfer of an American company represents a national security risk. 7 more agencies participate and assist, but don’t have a vote. They are:

The problem with CFIUS is, its a voluntary system. Companies can alert the government…IF….they believe the sale or transfer would be a risk to national security. Since its inception in 1988, 2,380 notifications have been voluntarily made to the federal government. Out of all 2,380 notifications, only 219 cases have been investigated, and out of those 219 cases, only 15 have been disallowed. That’s 15 cases in 28 years, about 1 every 2 years. The general policy of the United States is to not get involved. As you can tell from the numbers, it is rare to block a sale of a business. During Hillary’s time as SOS, 289 notifications were made and only 1 case was disallowed.

CFIUS is the hammer the media has used to make the misleading statement that “Hillary gave away 20% of America’s uranium” Although that is a misleading statement, since Hillary was only one of 9 votes, think about this: 5 affirmative votes can stop any blockage of a sale. Now look at who the 9 people were at the time of this vote.

When CFIUS gets notified by companies that have made or are about to make a sale or merger, they have the option of conducting an investigation. In 2010, Russia was vying for a 51% share of Uranium One, a company that controlled 20% of American uranium reserves. CFIUS investigated and approved the sale in October of 2010. In June of 2010, 4 months earlier, Bill Clinton traveled to Moscow and was paid $500,000 for a speech. Coincidence? When that investigation took place, why was the FBI silent on what was transpiring with Rosatom and the bribery and kickbacks that had been going on in the uranium sales Rosatom was making? Was nobody aware of the money flowing into the CF from Russia and the people involved with Uranium One? For me it defies credulity that none of this was known by are highest officials.

To be fair, Homeland Security was not on board with approving the uranium deal—at least not publicly.  On July 20, 2010, Uranium One announced that Rosatom intended to take 51% of the company.  Less than three months later, U.S. Representative Ileana Ros-Lehtinen sent a letter to Treasury Secretary Timothy Geithner asking the CFIUS to block the sale of uranium to Rosatom.  She was joined by other US representatives, the Ranking Members of the House Committees on Financial Services, the Armed Services, and Homeland Security. However, a few online posts suggest that Homeland Security did indeed approve the deal and that the other affirmative votes supposedly came from the Attorney General and the Secretaries of Defense, Commerce, Treasury, Energy, and the State—leaving  John Holdren and Ron Kirk as the only ones that didn’t sell America out.
There’s one final piece to the story. In 2013, Rosatom buys the balance of Uranium One stock, which will give Russia 100% of Uranium One. Once again CFIUS has an opportunity to reverse the sale.  Still no mention by the FBI that Mikerin or TENEX is under investigation. But CFIUS does an investigation, they meet with Rosatom officials and get concessions. Rosatom agrees to leave Uranium One on the Canadian stock exchange, leaving it to be a public company. They also agree to not export any American uranium. Neither agreement is honored….big surprise! Immediately Russia removes Uranium One from the stock exchange, making Uranium one in affect a private company wholly owned and operated by the Russian government. We also now have firm evidence that Rosatom has been exporting tons of processed U308 yellow cake uranium. But that’s not the best part. Read this account from the “Hill” that explains the evidence of export. If this doesn’t speak volumes about the corruption in our government, then I guess you just can’t be convinced:

NRC memos reviewed by The Hill show that it did approve the shipment of yellowcake uranium — the raw material used to make nuclear fuel and weapons — from the Russian-owned mines in the United States to Canada in 2012 through a third party. Later, the Obama administration approved some of that uranium going all the way to Europe, government documents show.  NRC officials said they could not disclose the total amount of uranium that Uranium One exported because the information is proprietary. They did, however, say that the shipments only lasted from 2012 to 2014 and that they are unaware of any exports since then.

NRC officials told The Hill that Uranium One exports flowed from Wyoming to Canada and on to Europe between 2012 and 2014, and the approval involved a process with multiple agencies.

Rather than give Rosatom a direct export license — which would have raised red flags inside a Congress already suspicious of the deal — the NRC in 2012 authorized an amendment to an existing export license for a Paducah, Ky.-based trucking firm called RSB Logistics Services Inc. to simply add Uranium One to the list of clients whose uranium it could move to Canada.

The license, reviewed by The Hill, is dated March 16, 2012, and it increased the amount of uranium ore concentrate that RSB Logistics could ship to the Cameco Corp. plant in Ontario from 7,500,000 kilograms to 12,000,000 kilograms and added Uranium One to the “other parties to Export.”

The move escaped notice in Congress.

Uranium One’s American arm, however, emailed a statement to The Hill on Wednesday evening confirming it did export uranium to Canada through the trucking firm and that 25 percent of that nuclear fuel eventually made its way outside North America to Europe and Asia, stressing all the exports complied with federal law.

In conclusion, the questions I posed require an answer. Whether or not we get one is unknown. Once again we have a dysfunctional congress “looking into it”. What do you want to bet that, like so many issues that congress investigates, nothing comes from any of it. Here’s what I believe: The plan to give Russia control of so much uranium was hatched a long time ago by Putin, the oligarchs in Russia, and the Clintons. Millions and billions of dollars were made by a few…and a lot more to come, people were killed. It seems like we are always asking the question is our government inept or corrupt? After looking at this story how can you not know it is corrupt beyond repair? And collusion? This passed collusion about 20 paragraphs ago. This is criminality at a level beyond comprehension. We used to be the good guys…working for good and honor and truth. How can we claim that today. We are as corrupt as any third world despotic shit hole in the world. I’m sorry, but I have no answers. As long as the crooks have control of our justice system there is little we can do to stop it. Pray that Trump can make a difference.

One thought on “The Corruption Continues, Part 3, The take over”