In my last post I began an investigation into Indivisible. Before I go on with that report below, I want to post the Facebook post I made that prompted this research. It stemmed from an audio recording provided that exposed organizing tactics of the disruption of town halls in small city congressional districts. Here is that post:

“Recently I posted an audio of some folks strategizing about how to disrupt republican town halls. The main instructor was identified as James Proctor. So I did a little research….duh!

I can’t attest to any of this because it was an audio, and I couldn’t see his face, thus age. But there were only 3 James Proctors listed in Louisiana. The one that stood out was from Jeanerette, Louisiana, almost on top of Acadiana, where the article said there was a branch of “Indivisible”.  Coincidently, Jeanerette and Acadiana are only about 30 miles south of Lafayette, where LSU is. Hmmmmm! I think I got the right James Proctor. If I do, Mr. Proctor is a reverend and runs an outfit called ALPHA COMMUNITY OUTREACH CENTER. Below is a screen shot from a D & B report that shows they got a little money in the bank. But there’s more. On their non-profit documents there are 3 principles, including Proctor. One is named Clifton Tate, who is also a partner in an insurance agency in Opelousas, LA about 10 miles north of Lafayette, but lives in Jeanerette. Mr. Tate is the director of JEANERETTE CITIZENS ALLIANCE FOR PROGRESS, INC. At the exact same address is another non-profit called EVENING STARLIGHT OPTIMIST CLUB. I initially thought this was just some other business in the same building, but it is registered as a non-profit, and the same guy is also an agent for both…Russell Boutte of Jeanerette. 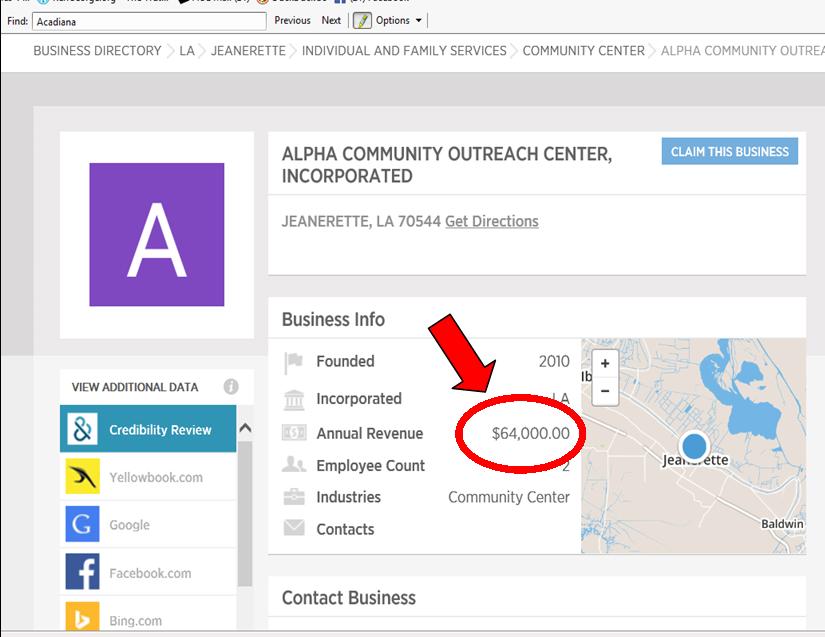 The actions on the audio are reported to have been guided by “INDIVISIBLE” an organized progressive, very organized group that claims affiliation with 7000 groups all over America. That’s no small feat. I’ll do more on Indivisible tomorrow, but I believe this is a PAID, organized effort to undermine any and all of Trumps legislation. Never, ever, never, underestimate the power or the money on the left. They will do anything and everything to stop our movement.”

Here is the audio and story behind INDIVISIBLE:
http://dailycaller.com/2017/02/27/leaked-audio-reveals-anti-trump-forces-manufacturing-hostile-town-hall/

If you’ve read the first post on this story, I tracked the money and followed it to its source. I also outlined how INDIVISIBLE was created and by whom. Now I want to show you their strategy and why they are doing what they are doing. Make no mistake, the left is trying to create a Tea Party type movement. But they are doing it using violence, agitation and disruption. They no longer believe that protests alone can get them what they want. They are taking their disruption to small towns and cities near you. The left is on the march and have the money and the organization to spread their radical ideas to our communities. Pay close attention to who is running for your mayor, your council, or your school board. The only wildcard is the division between the two faction competing for control…..the OFA (Organizing for Action) which is run by Obama and the DNC establishment and INDIVISIBLE, which is the more radical, socialist wing of the party, run by the now defunct Sanders people.

In my research, I came across a man named Micah White. He is a co-founder of the Occupy Wall Street movement. Occupy Wall Street happened 5 years ago. In a recent interview, Mr. White said OWS was a “constructive failure”. He said this to the interviewer:
“….the number one thing for people to realize is that protest alone doesn’t give the people power. There is no constitutional requirement that Trump has to listen to protests if they exceed a certain size, et cetera. There’s only two ways to gain political power in our world right now and that’s to win elections or win wars.” Then on November 14th, White wrote in an article for Guardian. He said this: “What is to be done now? American activists must move from detached indignation to revolutionary engagement. They must use the techniques that create social movements to dominate elections.”

Now, you might say…just another wacho from the left. But they really do have a plan and the money to carry it out. Mr. White tried somewhat of an experiment. He moved from the big city of San Francisco, to a corner of Oregon’s coast called Nahalem. Even as small as it was it had its poor and homeless. With an average income of $47,000 it lived off of tourism. Nahalem has 180 registered voters. He lived there for a few years and then ran for mayor.  It completely divided the small town. Neighbor versus neighbor, black versus white. His goal was to see if he could take his message to rural America. He lost the contentious election 139-36. The point to this, is it was an experiment. This is the coming application of taking over rural America…..win small elections and turn the counties.

In that same interview with Current, another guest was being interviewed along with White. Her name was Becky Bond. She was a senior advisor to Bernie Sanders, and responsible for organizing the grass roots through the use of social media for the campaign. She said this: “….consumers going to a company or it can be as voters going to a politician threatening to throw them out if they don’t fight for the agenda that helps the people with the problems that they’re facing in their lives. It’s also increasingly becoming people becoming sand in the gears of the machine and actually resisting and refusing to participate in a government that abuses their rights.” I’ll leave it up to you to read into her comments what you will.

Bond also has written a book. A book with a familiar ring to it with political junkies: Rules for Revolutionaries But she has taken her knowledge from the campaign and has taken it to a new level creating INDIVISIBLE, an organized, well funded community organizing force touting 7000 affiliates all over America, ready to protest at a minutes notice. But there is a disconnect between the tens of thousands of minions within the INDIVISIBLE movement and the establishment OFA, led by OBAMA. Obama has said that the left needs to create a “tea party type movement”. So both factions have the same strategy, and both are vying for the same money and control. Just as with the republican party, there is a massive struggle between the grass roots and the establishments. Who will win in the democrat party is unclear, but the point of this report is to warn you of the new strategy. They are bringing these protests to small rural venues. They have figured out that they need to win more than just the big cities. But beware, its not just simple protests. They plan to agitate and disrupt, and find militant candidates that will run for local offices. In other words, they want to divide our neighborhoods. The irony is, just as they are pulling out stops to win in the rural areas, republicans are trying to figure out how to win in the cities. Whoever solves the problem will be undefeatable….I’m putting my money on Trump.